One of the books that I was influenced by in building WhipSmartt was The Power of Habit.  Talking about in in detail would take way more time than a blog reasonably allows.  I will just spend a few sentences on the habit loop of cue-routine-reward. This basically says that the most powerful habits that we have starts off with a cue, then we have a routine we must learn in order to get the reward.  The keys here are that we have an obvious cue and that the reward is significant enough as to motivate us to do or learn the routine. 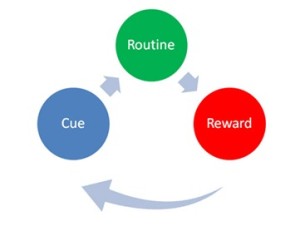 Lets look at an example.  Say I want to lose ten pounds.  To do this I have come up with the plan of go the gym five times per week.  Okay great.  Now I could do what most do, which is just try to be disciplined about going.  That rarely works in building a new habit, which in this case is working out five times per week.  According to The Power of Habit, the first question should be what is my cue?  And within that cue needs to be a reminder of the reward I will receive.  What we see here is the high level of importance for social benefits being connected to working out.  It will take me months (most likely) to lose the ten pounds, but if there are people who I like to see while I go to workout, that is a reward that might keep me going.  Maybe there’s a great sushi place next to the gym and I like to eat there but only allow myself to go after a workout.  The cue is much more difficult, but perhaps in the future wearables can come up with an answer.

Technology makes cues much more simple.  Lets take a quick look at how social media works and how they have followed the cue-reward-routine loop.  I’m on Facebook/Twitter/Instagram whatever, and I use it some.  What happens is eventually someone comments on some post/pic/video that I posted.  What happens next?  A message gets sent to my phone saying that someone said something about something that I posted.  My phone won’t tell me what it says, but just that they commented.  This is the cue.  Well, of course I wish to know what they said, so I check it out.  This is the routine.  While there I probably scroll at least a little bit, and this is the reward, getting to see other things that people think or are up to.  An interesting part of this reward is the unpredictability of what I might see or read next.  Given that, I might just comment or post again, and the loop continues.  Very powerful, much more powerful than the exercise example in the paragraph above.  In both our personal lives and our businesses we should strongly consider how to develop strong cues and rewards to impact action taken and the resulting habits.